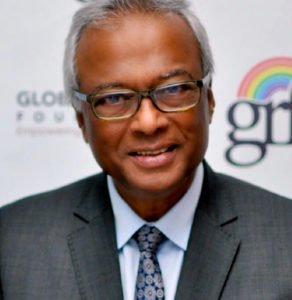 Armoogum Parsuramen began his career as a teacher. He became interested in politics, starting as a village councillor and quickly rose through the ranks to become Minister of Education, Arts, Culture and Science from 1983 to 1995. He then joined the World Bank as a Senior Advisor in Washington D.C., before taking up the position of Regional Director of UNESCO in Paris, Senegal and then India.
In 2011, he retired and, back in Mauritius, created the Global Rainbow Foundation, a way for him to achieve his new mission: to help the most vulnerable. Serving Humanity is what drives him, it is both a personal fulfillment and an achievement. He owes his success to the religious values instilled in him by his parents, and his inspiration to emblematic figures such as Gandhi and Mother Teresa, whom he had the honor of meeting in Calcutta in 1994.

Global Rainbow Foundation was founded by Prof. Armoogum Parsuramen on 11 November 2011, with the aim of empowering differently abled persons and vulnerable groups through education and training, and to provide them with the opportunity for holistic human development so that they can lead a happy and rewarding life with dignity and respect in the local and global community. To this end, the GRF provides them assistance, works for their empowerment, integration and respect for their fundamental rights, guarantees them equitable employment opportunities and encourages them to strengthen their self-esteem. Its role also consists of organizing awareness-raising activities and campaigns aimed at changing attitudes, mentalities and stereotypical perceptions towards people with disabilities.

The activities of the organisation are oriented towards educating, enabling, and empowering Persons with Disabilities : https://bit.ly/33em0yg 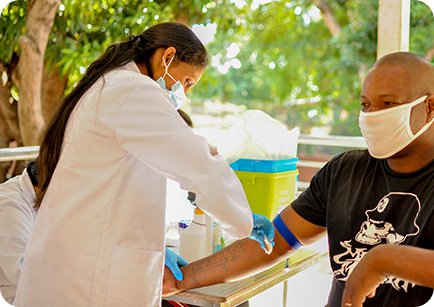 Our vision is to become a key organisation in Mauritius and abroad in the field of disability to empower persons with disabilities through a holistic approach. Services includes medical services, education and training to provide beneficiaries to lead a happy and rewarding life with dignity and respect. 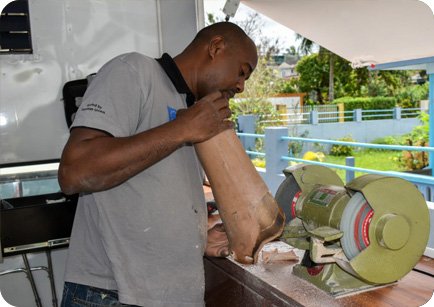 GRF is a humanitarian service-oriented organisation whose mission is to mobilize all available resources from well wishers in Mauritius, Rodrigues, Agalega, India, Senegal and other countries, formulate and coordinate multifarious activities in order to unleash the hidden talents and unexplored potential of persons with disabilities (PWD’s) and vulnerable groups. GRF militates for the human rights and inclusion of PWDs.

To provide medical and rehabilitation services to persons with disabilities. implement projects aimed at poverty alleviation, advancement of education, providing assistance to physically and mentally challenged individuals and relief to vulnerable groups.

To work for the empowerment, integration and rights of persons with disabilities.

To develop innovative programmes aimed at creating an inclusive society where persons with and without disability walk hand-in-hand and work shoulder-to-shoulder.

To foster a strong partnership with local and international organisations in the development of capacity building programmes in education, health, rehabilitation, social and economic integration.

To ensure equitable employment opportunities for differently abled persons and encourage them to boost up their self-esteem and assume leadership roles.

To act as a permanent advocate of those with no voice.