I am extremely honored to address you on this prestigious moment when we are celebrating the Birth Anniversary of the two most iconic leaders in the history of India and Mauritius, Mohandas Karamchand Gandhi- the Father of the Nation of Republic of India and RT Hon. Sir Seewoosagur Ramgoolam- the Father of the Nation, Republic of Mauritius. The Global Rainbow Foundation had planned to organize the Birth Anniversary of SSR on 18th September and that of Mahatma Gandhi on 2nd October 2021. Due to unforeseen circumstances, we therefore decided to hold both the celebrations on 2nd October. SSR was just 31 years younger than Mahatma Gandhi and it was I believe destined for us to have this joint celebrations. We have different eminent speakers who will talk on the lives and vision of our two Fathers of the Nation. I am eagerly waiting to hear from them.  I hope through my speech I will be able to enlighten you all about some major aspects of convergence in their life briefly that can teach us to lead amid a crisis.

I wish to express some words of thanks to all those who have helped to make this day happen and most importantly the One who has ensured that I am with all you today on this blessed and solemn day.
I am guided by an old Malayan proverb “One can pay back the loan of gold, but one dies forever in debt to those who are kind.”

I will start with the first one The Almighty God. All that I have achieved in life till now is thanks to his constant blessings and protection and most importantly from rescue me from health issues which could be fatal. He saved me in 2010 and I had a call to dedicate the new lease of life to service to the vulnerable, especially the PWDs. On Wednesday in the early morning I was rushed to Clinic Darne for urgent health issues and was not sure I could be present today. But he took care once again and gave me his greenlight to be with you all today.

Second I pay tribute to Late Sir Beergoonath Ghurbhurrun for his vision of setting up the Gandhi Ashram 55 years ago and in 2016 The Dr Prabha Ghurbhurrun Chartiatable Trust with the blessings of Dr Prabha Ghurburrun and her daughter NIshta Ghurburrun put this complex at our disposal to enable GRF to offer all the services you have seen during your visit today. We are committed to ensuring that the vision of Late Beergoonath for service to humanity will continue for many more years with the joint partnership we have between GRF and Ghurburrun Charitable Trust.

Third I wish to express my sincere thanks to all our distinguished guests who have responded to our invitation and honour us with your presence.

Last but not least my thanks and gratitude goes to Dr Navin Ramgoolam who is a genuine friend and gave me all his support for GRF. Few months ago he had confirmed his presence .We are relieved that his health has improved and we continue to pray for his complete recovery and be back with us in perfect health.

⦁ My inspiration in public life

Two legends; Gandhi and SSR have inspired me by their work especially in the field of education and services to humanity. Both are known for their great sacrifice and contribution for the betterment of the society. Living with a simple life they both inspire the youth to become great.

Gandhi Smriti, Martyr place where Gandhi was assassinated on 30th January 1948, but his theories of truth, non-violence, and supremacy of means over ends cannot be lost sight of and a constant source of inspiration for us. In fact, when I was appointed as Director UNESCO New Delhi in 2009 and I had to assume my charge, I visited this place first and took blessings from his great and holy Soul ‘the Mahatma’.

As Secretary of UNESCO Executive Board I had an opportunity to associate myself and used my privileged position to support the Indian Delegation to UNESCO on a resolution to set up the most fitting tribute to Gandhi ‘The UNESCO International Institute for Education, Peace and Sustainable Development’ in New Delhi.

My special relationship with SSR was as far back as 1979 when as President of the District Council North I was in the Mauritius Delegation to attend the beatification of Pere Laval. After Rome we flew to London and Chacha had affectionately invited me and my wife to have lunch with him at the Mauritius High Commissioner’s residence in London. He demonstrated his affection to us by personally putting on our overcoat before we left after lunch.

When he lost elections in 1982 he again demonstrated his sagacity and deep sense of patriotism by advising Sir Anerood Jugnauth how to deal with the crisis with MMM and later agreed to bring Labour Party to join MSM in 1983 Election. I recall with gratitude how in the 1983 General Elections he was with us in Constituency no 6 on a lorry in the evening campaigning for us in the General Elections.

When he became Governor-General I made a point to visit him regularly to seek his advice on Education policies. One instance in 1983 because of severe economic constraints Government was planning to abolish the Laureate scheme. I did not share this view from Government and ran to SSR to seek guidance. He told do not touch the Laureate scheme. I managed to convince government not to go ahead by successfully negotiating for part 50 % scholarship with UK and additional laureateship from France and Australia.

There was no school bearing the name of SSR and in 1984 following my invitation he came to the modest village of Pavillon CapMalheureux for his 84th birthday celebration. On that day I was touched and felt so much gratitude to SSR and I humbly invited him to accept my proposal to name my Primary School at CapMalheureux in his name. He accepted and the school proudly bears his name. and later on following a donation by a friend, a Swiss philanthropist, I opened a pre-primary school, SSR Pre-primary school, in Kewal Nagar, Belle-Rive his birthplace.

In 1935 he returned to Mauritius after completing medical studies in London and work to improve the living and working conditions of the bulk of the island’s population which consisted of the descendants of indentured Indian laborers and enslaved Africans.

⦁ Both are Father of the Nation

Both are respected and revered as Father of the Nation and there are a number of common elements which bring these two great souls into a convergence of vision.

GRF is inspired by Mahatma Gandhi in our vision and mission of service to humanity and we have adopted the Gandhi quote “A nation’s greatness is measured by how it treats its weakest members” and have also adopted his favourite bhajan, written by Narsingh Mehta in the 15th Century“Vaishnav Jan to song tene kahiye je” meaning:
“A Vaishnav is someone who feels the pain of others”

On 12th March 1930 Gandhi started his famous Salt March to break the British Salt Laws and launched the inauguration of the civil disobedience movement, Satyagraha. SSR chose 12th March 1968 as the date for the celebration of Mauritius National Independence day.

Gandhian concepts on Satyagraha, Education, Unity, Truth etc. relate to human rights and responsibilities. Gandhi ji stood for love, universal brotherhood, freedom, justice and equality to him. Service to community is service to God. Human rights are said to be those fundamental rights which every man or woman inhabiting any part of the world should be entitled to by virtue of having been born as a human being.
Infact Mahatma Gandhi was an international symbol for human rights whose personal dedication to nonviolent resistance inspired generations

In 1973 SSR was awarded the United Nations Prize in the field of Human Rights in recognition for his “outstanding achievements in the field of human rights.” The President of the UN General Assembly while presenting the Award to SSR stated: “you have done exceptionally valuable work in the protection and defence of an exemplary multi-racial society”

Both Gandhi and SSR were both recognized and honored by UNESCO with the prestigious UNESCO medal. You imagine my feeling of pride as SSR UNESCO Medal was awarded during my tenure of office at UNESCO Paris. 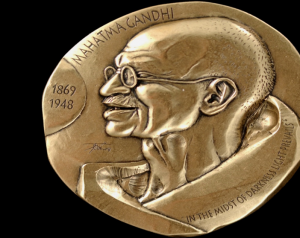 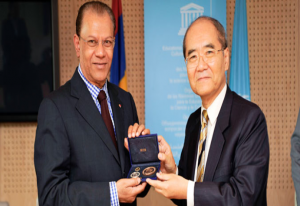 ⦁ Gandhi and SSR: as a Political leader/journey of leadership

Gandhi began his struggle of India’s independence between 1915 and 1920. After Gandhi returned to India towards the end of World War I, he began employing non-violent tactics in his home country that he refined in South Africa. After raising grassroots support among the lower castes in the nationalist movement he organized strikes, boycotts, and hunger strikes. Gandhi joined the Indian National Congress and was introduced to Indian issues, politics and the Indian people primarily by Gokhale. Gandhi took leadership of the Congress in 1920 and began escalating demands until on 26 January 1930 the Indian National Congress declared the independence of India.

SSR during his University studies in London spent time at the Indian Student’s Association, an organization that provided support for Indian students who had come to England from abroad. While at India House he came into contact with the Indian leaders of the early twentieth century: Mohandas Gandhi, Jawaharlal Nehru, Subhas Chandra Bose, Lalla Lajpat Raid, and the writer Rabindranath Tagore. Ramgoolam also became a founding member of the Indian Student’s Central Association that was located at Knightsbridge in West London. Even though he was a serious student, he continued his political activities on a very intense level. By 1924 he was the president of the London branch of the Indian National Congress.

The paths of these two emblematic figures have been linked and they have each contributed greatly to the development of their respective nations perhaps through the exchanges and vision which were undoubtedly born in London. I believe that it is, therefore, fate more than mere coincidence which has led us to celebrate their greatness at this joint celebration. We bow to our beloved leaders on this auspicious occasion. There is much to learn from their lives and noble thoughts. May their ideals keep guiding us in creating a prosperous, peaceful and compassionate world.

Let me conclude with words of thanks to those who keep GRF going rising and shining in its mission of service to humanity and also an a few announcements.
⦁ Congratulate Staff and prepare for GRF to sustain its activities after me.
⦁ Armoogum Parsuramen Foundation to serve needy persons outside GRF mandate: Rodrigues , Chagos and Agalega and India needy students with secondary, school and university studies
⦁ SSR was a symbol of what a one eyed person who is considered as disabled can do for his nation and humanity. I wish to announce a Special GRF SSR Award for Blind persons in Mauritius on 11th November 2021 on the occasion of GRF 10th Anniversary
⦁ The Commemoration today of the Birth Anniversary of Mahatma Gandhi and Sir Seewoosagar Ramgoolam today was a very solemn occasion.
To give full justice to the two great personalities of the world, GRF will organize with collaborations from various other organisations, local and international, a symposium in 2022 on the theme of “The relevance of the vision of Gandhi and SSR today”
Thank you!!