Life was not easy for the young parents when they realized that their little bundle of joy was blind. But, they worked their way into supporting their daughter to the best of their ability. They cuddled her with love, care and most importantly, empowerment. Born from father Tony, a Pianist and mother Francoise, a teacher, Jane Mary Constance had no reason not to shine.

At five years old, realizing their daughter had an ear for singing, Tony and Francoise started her on singing lessons. And, at the same time, Jane took her first steps into a specialised Primary school. Francoise made it a point to learn ‘Braille’ to help her daughter with her education after her school hours. Francoise’s motherly dedication is the backbone behind her daughter’s educational achievement.

As from seven years old, Jane started her Piano lessons and achieved brilliantly at The Association Board of The Royal Schools of Music with a grade 4 for playing the piano and a grade 3 for singing. 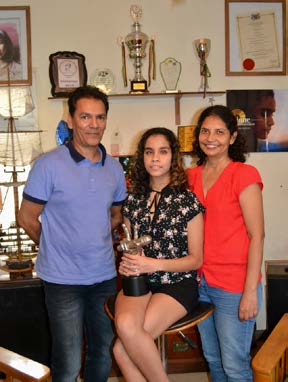 Francoise’s motherly dedication is the backbone behind her daughter’s educational achievement.

Today, the 18-year-old Jane is a world renowned figure in the Music Industry with her winning at the talent show ‘The Voice Kids 2015’ in France. With a feeling of pride in her voice, she relates her life story. She humbly starts with her selection for the show. She was discovered and selected as a contester in 2014 on the talent show. Jane continues that:

“I did not even register for it; I was selected through an agent who chose me from one of my various video clips posted on my YouTube Channel. It was the song called ‘Somewhere on the Rainbow’ and, it was sent to the show. While I was selected, all my performances for the pre-selections were conducted via Skype. I only made the trip for the finals.”

Jane’s selection was not an out of the blue choice for the agent. She was already selected by Destiny with the boon in her voice. Her melodious voice became her eyes, through which she sees the world.

An ecstatic Jane relives that blessed moment with us once more. She happily revealed:

“One of the most enriching moments of my life, I had the chance to rub shoulders with the best singing ‘Maîtres’ of France.”

Jane continues: “Plus, I met with young people who shared the same passion as I. Most of the contesters came from the biggest Academies of Music in the World except me, an unknown little girl from the Island of Mauritius. Everything seemed unreal. It was, after all, a great reward to my solemn dedication of lots of years of practice and hard work. My parents knew I was going to do well but, winning was beyond everyone’s expectations.”

Jane’s winning the grand singing show brought colours in her life as now she gained an artistic momentum, which she cherishes. Her practice and years of sacrifices paid off on that international platform.

A star was born. Life changed completely for Jane after this event. People would just swamp around her everywhere she went, asking for an autograph, a photo or just to congratulate her. Being incognito was no longer possible.

Mauritius saw the birth of a new feather added to its artistic hat.

Star and Key of the Indian Ocean

Jane attains the peak of her fame. Back in Mauritius, she was the recipient of one of Mauritius Highest Awards, the MSK, (Member of the Star and Key of the Indian Ocean) for her contribution in Music and Culture.

Our little island girl has come out of her shell and is the ambassador for Mauritianism on the international platform. Jane is the pride of Mauritius.

Jane is not only our Mauritian Nightingale, but she also outshines in her studies. Obtaining good results as well at the CPE level (PSAC), she joined a private High School to further pursue her education. It was not an easy task since the teachers were not necessarily trained to teach her. They are mostly mainstream teachers. She voiced this out not as a criticism, but more as an encouragement to those who might face the same situation.

According to her, it would be really helpful if teachers would have some sort of training to cope with blind children. Blind does not mean that one is not intelligent and cannot achieve high grades; it is just a different method or approach to learning.

Jane made her appeal towards training mainstream teachers to tackle students suffering from visual impairments.

To follow and facilitate the work, Jane used a Braille Note to do her classwork as well as to complete her homework. By plugging the device to a screen, it enabled the teachers to guide and correct her. This Braille Note assisted her quite a great deal throughout her higher studies.

She passed her High School Certificate (HSC) exams with flying colours and, is now looking forward to university life. She seeks to experience her tertiary education as a mature and empowered woman. Her main objective now is to study Sociology and Criminology. She has been accepted at the Uklan Preston University in the UK and is joining them in September for a new start.

Music and singing are running through her veins like her blood. She has no intention to turn her musical career as a pastime or a hobby. In fact, she already plans and knows exactly how to conjoin her studies and art together. Jane will see to it that her studies and musical life walk hand in hand.

Jane is now soaring the sky of the Mauritian artists. In 2016, our star launched her first album titled ‘A Travers Vos Yeux’ with Universal Music, France. Her debut album was an international success and well received by the listeners. Jane also got recognised by the UNESCO as UNESCO artist for Peace in 2017, in Paris, France.

Our Jane became an ambassador for the Louis Braille Museum in France. She was recently equally entrusted with the title of Ambassador by the European Union for the project ‘Rise and Shine’ in Mauritius. Jane happily comments: “The benefit of being with GRF is to be able to help others in the same situation as I. I am a role model to others. I guide other blind people.”

Her journey does not stop here. Music advocates multiculturalism and pluri-lingualism. What is Music, then, without language? This dynamic young lady has more to offer. Jane’s love for singing drove her to learn many other languages. Apart from the usual English, French and Creole, she learned Italian, Chinese and Hindi; her powerful statement is “there is no point of me singing if I do not have an understanding of the lyrics. I have to convey real feelings”. This open mindset got her a standing ovation in 2014 at the MGI when she sang ‘Raghupati Raghav’ song for the Indian Independence Day celebration. 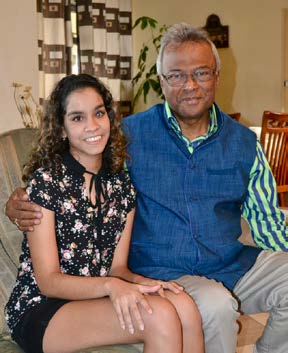 Jane’s connection with the Global Rainbow Foundation dates back to 2012 when she met the President, Mr Parsuramen for the first time at the age of twelve. She became an Ambassador for GRF at thirteen years old. Jane has developed a special relationship with the President Founder whom she considers as her “Grandpere de Coeur” and affectionately calls him “Parsu”. Their bond brings bundles of happiness to both of them.

Jane is flexible and open to all possibilities that will pave a better tomorrow and a brighter future for her. She rightly puts it across that “my disability has never been my weakness.” Jane ends the interview by stating that she is wellaware that the new journey into the University is yet another challenge. Nevertheless, as long as she believes in herself and believes in her dreams, she will overcome the hurdles in music.