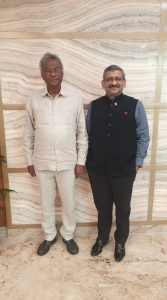 I thank Mr Navin Charan MD Indian Oil Mauritius who arranged my visit to Mr Mohapatra in Delhi.
We had a very warm and fruitful meeting. I conveyed my sincere thanks to Mr Mohapatra for his timely and valuable support to GRF during his tenure of office in Mauritius. In fact Mr Mohapatra had sponsored our third medical camp in 2015 which enabled us to offer 150 amputees free artificial limbs(Jaipur foot). I also expressed gratitude to Indian Oil for its continued support to GRF especially for sponsoring a Lorry which is fully equipped to offer maintenance facilities to amputees in their region.

I have extended an invitation to Mr Mohapatra as our Chief Guest to visit GRF Centre during his future visit to Mauritius and participate in a special event to showcase Indian Oil significant contribution to persons with disabilities in Mauritius.