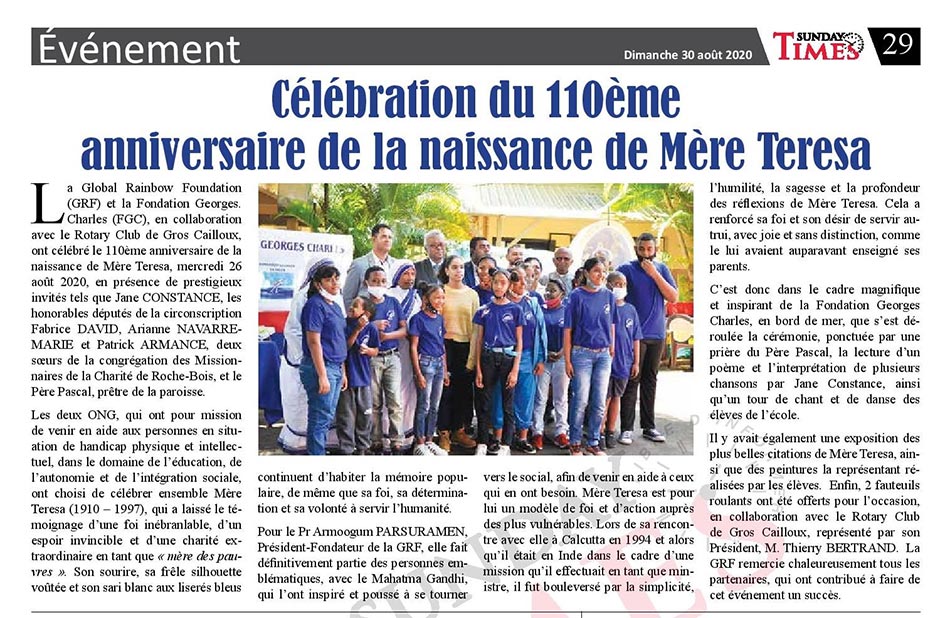 True to tradition, the Global Rainbow Foundation celebrated, this Wednesday August 26, the 110th birthday of Mother Teresa. An event of great importance and symbolism; The NGO makes a point of paying homage to this charitable soul every year. This year, the GRF has chosen the Georges Charles Foundation in Pointe Aux Sables as an inspiring venue for the ceremony, for the atmosphere that reigns there and its dedication to children and young adults with intellectual disabilities. Father Pascal, representative of the Council of Religions, said a prayer on this occasion, in the presence of parents, students of the foundation and other prestigious guests such as the honorable deputies of the district Fabrice DAVID, Arianne NAVARRE-MARIE and Patrick ARMANCE. The congregation also had the privilege of listening to Jane CONSTANCE recite a poem by Mother Teresa entitled “Happiness” and sing some of her most famous songs. For Armoogum PARSURAMEN, Mother Teresa is one of the emblematic people, along with Mahatma Gandhi, who inspired and pushed her to turn to the social, in order to come to the aid of those who need it. When he met her in Calcutta in 1994, while in India on a mission he was carrying out as a minister, he was overwhelmed by the simplicity, humility, wisdom and depth. reflections of Mother Teresa. This strengthened her faith and her desire to serve others with joy and without distinction, as her parents had previously taught her. A
donation of motorized and manual wheelchairs was made to two beneficiaries, a student and a local resident, thanks to a collaboration with the Rotary Club of Gros Cailloux.